The Naked Vibes Show features conversations with musicians, artists & healers to ignite your creative genius & elevate you in your spiritual growth. 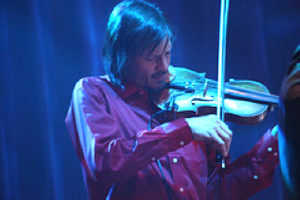 This episode features musician/songwriter, Reggie Rueffer of Spot (rock band formerly with Interscope Records) & touring violinist for Charlie Pride. His other bands/projects include The Hochimen & Mildred. In this radio archive, Reggie joined me in the studio to play live & to share his insights on the creative process. Some spicey conversation ensues.

SHOW NOTES:
2:34 – SONG: “Hymn” from the Heaven, the novel Soundtrack. Written & performed by Reggie Rueffer. This special version is only available on the complimentary CD that comes with the book.

7:57 – Story of how “Hymn” came to be. Reggie talks, with humor, about how easily he was able to write about religious issues mixed with sexual issues – & with the added challenge of writing from a woman’s perspective.

10:40 – Example of how creative ideas are not our own, but are shared universally.

11:03 – Sexual repression brought on by outside forces shapes our relationships & ability to express ourselves.

17:33 – Reggie & his brother, Chad, performed on the Local Honey Holiday Mix show with my sister, Kelly, & me. Reggie’s favorite part of the night was when we did “Noelle Nouvelet” as Brothers & Sisters.

19:17 – Mildred lyrics were inspired by Reggie’s experience as a Christian.

19:54 – Perceptions of Frankly Scarlet, the band I shared with my sister, were often that it was a Christian band because we sang about Love & Consciousness. You can’t remove who you are from your art.

20:38 – Expanding, through art, leads to places that are larger than religion. Music helps people connect on deeper levels.

20:56 – Great pop songs have always been written about “boy meets girl”. Reggie originally wrote more about the issues of the day.

21:36 – True that you’re perfectly who you are. Perfectly human. Mistakes & all. Recognizing this creates so much freedom. 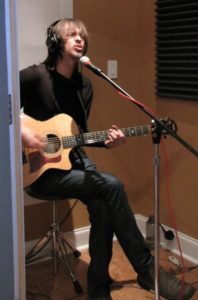 23:43 – Bands that play live exactly as the recording sounds often have no passion. It becomes craft instead of art. Art has to stretch. It can bring the darker human emotions a little closer to the surface, so we can recognize we’re not alone in those feelings. Example: Van Gogh’s paintings.

29:43 – Mistakes can turn out to be better than the original. When a voice cracks or someone hits the “wrong” chord, it can be a beautiful serendipity.

30:51 – The version of “Hymn” that can only be found on the CD that comes with Heaven, a novel is the original demo version & has more of a raw sexuality to it, more vulnerability. The Hochimen version on Tierra del Gato, called “Hymn To Them All” is more polished.

36:37 – What happens when an artist loses himself in “The Zone” & creativity flows without filters.

38:40 – Teaching young people that you have to learn skill first. Important to put in the hours to learn what you’re doing – then you can let go to the passion of the music, the art.

40:05 – Rhythmic Movement Meditation tools help you connect with your highest state of excellence & primal essence, so you can shift your energy for greater clarity, courage, focus, & empowerment. A potent combination of your sexual energy combined with your spiritual energy. GET THESE POWERFUL MOVEMENT MEDITATIONS NOW!
• These clients had life-shifting experiences using these movement meditations. Listen to what they have to say. Please understand this is not a claim that you will have the same or similar experiences. Rhythmic Movement Meditations are simply tools to help you learn to shift your own energy through powerful practice.

43:17 – Spot – Reggie’s band, with brother Chad, was signed to Interscope Records. You owe it to yourself to download this amazing album!

53:26 – How to start the process of changing your thoughts to benefit you in a more positive way.

54:12 – Creating the skill-set to “be spiritual” is the same as developing artistic muscles.

55:35 – When talking about spirituality & sexuality, people have trouble talking about non-duality, so we have to “marry” the feminine aspect to the male God. Then we see there’s a unified Whole.

56:38 – Sounds trite, but the solution to war, on a global scale, starts with me in myself, then embracing you.

58:15 – SONG – LIVE PERFORMANCE of a new song Reggie’s still working on as he tries to get in touch with his “inner dog”.

Sign up for Kimberly’s newsletter to stay in the know about upcoming videos, courses, performances, & more! Get a free Instant Ignition Worksheet to help you tap into your most powerful creative energy when you confirm your subscription.